"I am never too busy to think of S & S.  I can no more forget it, than a mother can forget her sucking child; & I am much obliged to you for your enquiries."

Jane Austen made her debut on the literary scene—albeit anonymously—with the publication of Sense and Sensibility in late October 1811.

Based on notes left by her sister, Jane Austen’s first draft of Sense and Sensibility, titled “Elinor and Marianne,” was written as early as 1795 when she was about 19 years old, probably in epistolary form (a novel-in-letters). In November 1797, Austen returned to the manuscript and converted it to the narrative format we know today. But it wasn’t until she moved to Chawton that she made a final round of revisions in 1809-1810 and, with her brother Henry as her agent, eventually submitted Sense and Sensibility to publisher Thomas Egerton. 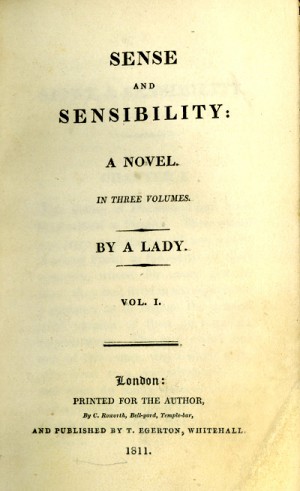 Believing in her work and determined to be a published author, Jane Austen took a financial risk and published the novel on a commission basis. In this arrangement, she paid for the production and advertising of Sense and Sensibility, gave Egerton a commission for distributing and selling the book, and kept the remaining profit from the sales. Austen chose to remain anonymous because at that time it was not entirely acceptable for a woman of her status to publish for profit. The title page of the novel says simply, “By a Lady.”

We know from her letters that Austen was in the process of correcting proofs in April 1811, hoping the book would be published soon. However, the wait was longer than anticipated; Sense and Sensibility was first advertised for sale in The Star on October 30. Ads ran in newspapers throughout November and also appeared at various times throughout 2012. The book was described variously as an “Extraordinary Novel!” an “Interesting Novel,” and, by December 1812, a “Popular New Novel.”

Now in her mid-30s, Jane Austen was finally a published author. The first edition of Sense and Sensibility sold out in less than two years, and the novel’s success inspired her to continue, as is evident in this passage from a July 3, 1813, letter to her brother Frank:

You will be glad to hear that every Copy of S.&S. is sold & that it has brought me £140 — besides the Copyright, if that shd ever be of any value. — I have now therefore written myself into £250 — which only makes me long for more.

With Egerton’s encouragement, a second edition was published in October 1813, again funded by Austen. She continued to receive profits from the sale of the second edition of Sense and Sensibility through March 1817. 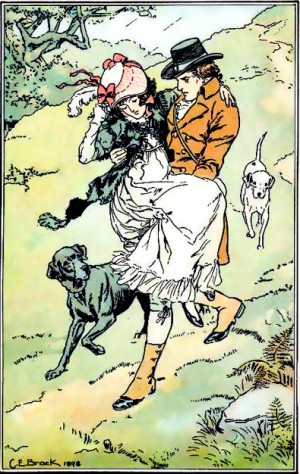 A few months after its publication, Sense and Sensibility was reviewed favorably in The Critical Review, which praised the novel for its “naturally drawn” characters and its realistic plot: “The incidents are probable, and highly pleasing and interesting.” In keeping with the critical attitude of the era, the reviewer also highlighted the novel’s value as an instructional tool that offers an “excellent” and useful moral.

Sense and Sensibility was well-received by the public when it was released and is still popular as part of Austen’s canon. It showcases her keen understanding of human nature and psychology and her satiric wit. Readers also appreciate its ironic depiction of the economic motivations at work in the Regency marriage market.

Explore the resources below for more in-depth information about Sense and Sensibility, a discussion guide for your reading group, and more.

For the First Time in Forever: Sense and Sensibility and Frozen ›

“Pretty Fairly Divided Between the Sexes”: Jane Austen on Gender ›