A Note on Henry Austen’s Authorship of the “Biographical Notice”

Juliette Wells is the Elizabeth Conolly Todd Distinguished Professor of English at Goucher College.  She is the author of Reading Austen in America (Bloomsbury, 2017) and Everybody’s Jane: Austen in the Popular Imagination (Bloomsbury, 2011).  For Penguin Classics, she created reader-friendly 200th-anniversary annotated editions of Persuasion (2017) and Emma (2015).

While preparing an introduction for Penguin Classics’ new 200th-anniversary edition of Persuasion, I encountered an unexpected difficulty.  Northanger Abbey and Persuasion were first published “with a biographical notice of the author,” as stated on the title page of John Murray’s 1818 edition. Although the “Biographical Notice” includes no byline, it is widely known to be the work of Jane Austen’s brother Henry.  But how exactly do we know that Henry wrote it? I expected this seemingly obvious question to be easy to answer.  To my surprise, however, I found that it was not.  Henry Austen is identified unequivocally, and without justification, as the author of the “Biographical Notice” by the editors of the 2006 Cambridge editions of Persuasion and Northanger Abbey; by Deirdre Le Faye, the Austen family historian and editor of Austen’s letters; by the Austen bibliographer David Gilson; and by B. C. Southam, the compiler of historical Austen criticism.1  None of these respected scholars direct the curious reader to a source attributing authorship of the “Biographical Notice” to Henry. 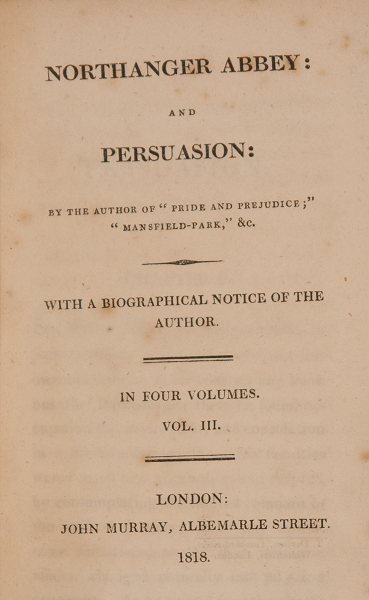 I then added a second question to my investigation:  who first identified Henry as the writer of the “Biographical Notice”?  J. E. Austen-Leigh’s 1870 Memoir of Jane Austen, the first full-length biography, concluded with Austen’s burial and made no mention of the “Biographical Notice” (131).  Nor did the multi-chapter biography of Austen prepared by Edward, Lord Brabourne to precede his 1884 edition of Austen’s letters.  The first hint appeared in 1892, when Reginald Brimley Johnson, editor of a ten-volume edition of Austen’s novels, stated that the “Biographical Notice” was “probably written by Miss Austen’s brother, the Rev. Henry Austen” (9: iv).  The next major biography, Jane Austen: Her Life and Letters (1913), by Austen family descendants William and Richard Arthur Austen-Leigh, declared with certainty that the first edition of Northanger Abbey was preceded by “a short biographical notice of the author from the pen of Henry Austen” (403).  R. W. Chapman, editor of the landmark 1923 edition of Austen’s writings, took up that identification without further explanation:  the table of contents of his volume containing Northanger Abbey and Persuasion includes an entry titled “Biographical Notice of the Author, by Henry Austen” (vii).

As of 1913, then, Austen family tradition assigned the “Biographical Notice” to Henry, an attribution that was respected and repeated first by Chapman and, subsequently, by everyone.  Having answered my second question, I adjusted my first one:  does documentary evidence survive of Henry’s authorship?

No relevant letters survive in the John Murray archive, according to “Jane Austen’s Dealings with John Murray and His Firm,” Kathryn Sutherland’s comprehensive and illuminating survey of documents now held by the National Library of Scotland.2  Sutherland quotes briefly from a letter written by Henry Austen to Richard Bentley on 4 October 1832 concerning another biographical treatment:  the 1833 “Memoir of Miss Austen” that is also attributed to Henry (116).  Sutherland previously drew on the same letter in her headnote to the “Memoir” in her 2002 edition A Memoir of Jane Austen and Other Family Recollections (258).  The portion of the letter quoted by Sutherland in that headnote makes clear that Henry wrote the “Memoir” and, by implication, the “Biographical Notice” as well.  In that letter, Henry described the “Memoir” as “[a] biographical sketch of the Authoress, which is to supersede that already publishd [sic]” and he remarked, “I heartily wish that I could have made it richer in detail” (qtd. in Sutherland, Memoir 258).  Sutherland stops short, however, of pointing out that this letter serves as the best available evidence of Henry’s authorship of the “Biographical Notice.”

Thanks to Sutherland’s scrupulous citation, I had another source to check:  Deirdre Le Faye’s 1992 article “Jane Austen: New Biographical Comments,” which reproduces the entire text of Henry’s 4 October 1832 letter to Bentley, now held in the British Library.  Le Faye describes Henry’s letter as “add[ing] a little more biographical information regarding” Austen, but she does not call attention to its function of supporting the likelihood that Henry wrote the “Biographical Notice” (“New Biographical Comments” 162).3

The absence of absolute proof of Henry’s composition of the “Biographical Notice” raises yet another question:  might Cassandra Elizabeth Austen have contributed, perhaps quite substantially, to that first description of Jane and her authorship for a wide audience?  Cassandra, Jane’s closest confidante during her lifetime, was present at her sister’s death and mourned her in eloquent letters to their niece Fanny Knight (Jane Austen’s Letters 359–62, 363–64).  As E. J. Clery has recently pointed out, no letters survive from Henry to Jane, or from her to him (5, 33), a circumstance that makes it difficult to determine the level of intimacy between them.  (Clery assumes, provocatively, that that intimacy was very close indeed.)

Certainly, both Henry and Cassandra recorded how Jane was memorialized.  The text carved into her tombstone survives in Henry’s handwriting, and that of one of her obituaries in Cassandra’s (Epitaph for Jane Austen, “From the Courier (Newspaper) 23d July 1817”).  In neither case is it clear whether the manuscript represents a draft or a copy.

Significantly, Cassandra was designated by Jane the “Executrix” of her will, drawn up in April 1817:  the legacy of “every thing of which I may die possessed, or which may be hereafter due to me,” included all of Jane’s unpublished manuscripts (Le Faye, Family Record 248).  Although Austen family tradition held “that Jane had asked Henry to be her literary executor” (259), documentary evidence indicates that he shared that role with Cassandra.  Bank checks from Murray in 1818 and 1820 were made out to both “The Revd Mr Austen & Miss C. E. Austen,” and Cassandra herself twice wrote to Murray:  in 1819 to inquire about accrued profits, and in 1831 to respond to his overture about republishing Austen’s novels.  Bentley’s 1832 contract to republish Austen’s novels, while signed only by Henry, specified in its text that “[t]he said Revd H. T. Austen in conjunction with his Sister, Miss C. E. Austen,” were “joint proprietors of the entire Copyright” of the works concerned (“Memorandum”).

It is not known which sibling, Cassandra or Henry, contacted Murray after Jane’s death to alert him to the existence of the novels we know as Northanger Abbey and Persuasion.  Whoever did so acted very quickly.  Murray mentioned in a September 9, 1817 letter to Lord Byron that he was in the process of publishing “[t]wo new Novels left by Miss Austen—the ingenious Author of Pride & Prejudice—who I am sorry to say died about 6 weeks ago” (246).4

Clery, in keeping with her claims regarding Jane and Henry’s ardent mutual attachment and his equally strong desire to promote her fame, discerns in the wording of the “Biographical Notice” what she calls “the mark of more cautious influences” upon Henry (309).  Who among Austen’s surviving family members weighed in on this piece’s composition, who actually penned it, and who transmitted it to Murray may never be known.  It is plain, however, that considering Henry to be the sole author of this important first biography of Austen results from speculation and assumption, rather than resting on documentary evidence.

1Appendix 2 of the Cambridge edition of Persuasion is titled “‘Biographical Notice of the Author’ by Henry Austen”; neither the headnote to that appendix nor the editors’ introduction justifies this explicit attribution (326, lviii–lix).  Henry’s authorship is likewise taken as a given in the editors’ introduction to Northanger Abbey (xl–xli) and by Le Faye (Family Record 259).  Gilson’s transcription of the title page of Murray’s edition of Northanger Abbey and Persuasion includes the bracketed attribution “[by Henry Austen]” (Bibliography 80).  Yet Gilson refers to Henry’s authorship without further explanation both in his commentary in his Bibliography on Murray’s edition and in his later article on the 1833 “Memoir,” a document also attributed to Henry, which was prefixed to the 1833 Bentley edition of Austen’s Sense and Sensibility (Bibliography 84; “Henry Austen’s ‘Memoir’” 12).  In the introduction to his Critical Heritage, Southam states that Henry “provided” the biographical notice, the text of which he reprints with the heading “Henry Austen: The Biographical Notice” (16, 73).

2David McClay, former curator of the John Murray Archive at the National Library of Scotland, confirms that there are “no known letters of Henry Austen in the John Murray archive, and as the collection has been fully arranged and listed, if not fully catalogued, it is unlikely that any misfiled or unknown letter would exist.”  Murray’s business ledgers, which record the production costs and sales of Northanger Abbey and Persuasion, make no mention of the “Biographical Notice.”

3Le Faye cites Chapman’s reprinting of a 24 July 1832 letter from Henry Austen to Bentley; that letter concludes with a postscript, “I bear in mind our conversation respecting any biographical relics of the Authoress” but does not otherwise refer to the “Biographical Notice” (H. Austen to Richard Bentley, 24 July 1832; qtd. in Chapman, “Austen and Her Publishers” 342).

4Clery states as a certainty that “with lightning rapidity, Henry assembled the manuscripts and prevailed upon John Murray” to publish them (308).