"You may perhaps like the Heroine, as she is almost too good for me."

Jane Austen’s last completed novel is also one of her most popular works. Often described as “autumnal” in tone, Persuasion is the story of a mature heroine and second chances.

According to the timeline left by her sister, Cassandra, Jane Austen began writing Persuasion on August 8, 1815. The first draft was completed July 18, 1816, but she was unhappy with the ending and subsequently revised it by writing two new chapters. 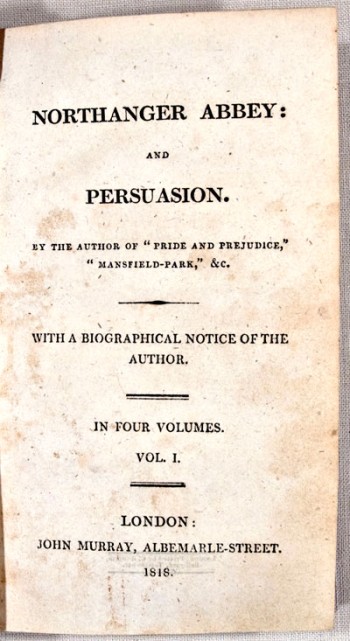 The final version of the manuscript was completed on August 6, 1816, when Jane Austen was 40 years old. The cancelled chapters, which are the only manuscript pages in existence from one of her completed novels, can be examined on the Jane Austen’s Fiction Manuscripts: Digital Edition website.

Although Persuasion was completed in August 1816, Austen took no steps to have it published. Perhaps she planned to revise the manuscript further before publication. In his “Biographical Notice of the Author,” which was included when the novel was later published, her brother Henry provided this description of her working method: “though in composition she was equally rapid and correct, yet an invincible distrust of her own judgement induced her to withhold her works from the public, till time and many perusals had satisfied her that the charm of recent composition was dissolved.”

Jane Austen mentioned the novel in a letter to her niece Fanny Knight on March 13, 1817: “Miss Catherine [Northanger Abbey] is put upon the Shelve for the present, and I do not know that she will ever come out; but “I have a something ready for Publication, which may perhaps appear about a twelvemonth hence. It is short, about the length of Catherine.” That “something” was Persuasion.

Jane Austen died four months later, on July 18, 1817. In her will, she left her unpublished novels and the copyrights to Sense and Sensibility, Mansfield Park, and Emma to her sister.  Henry and Cassandra Austen negotiated with John Murray to publish the remaining manuscripts as a four-volume set on commission, with “Catherine” renamed Northanger Abbey and Austen’s untitled, final work named Persuasion.  Advertisements in the Morning Chronicle and other newspapers show that the books were published on December 20, 1817, although the title page is dated 1818. The four-volume set also included Henry’s “Biographical Notice of the Author,” which revealed for the first time in print that Jane Austen was the author of Sense and Sensibility, Pride and Prejudice, Mansfield Park, and Emma.

Persuasion and Northanger Abbey were reviewed by two critics in 1818. They used the occasion to comment on the works of a popular author whose identity had been revealed only after her death. Focusing on Austen’s novels overall, they offered few comments about the two novels just published. 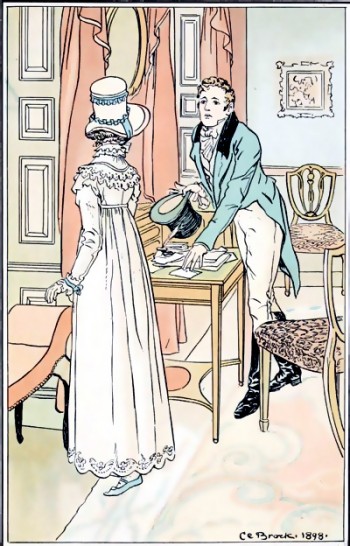 A review in the March 1818 edition of the British Critic praised the realism of Jane Austen’s works, saying that they “display a degree of excellence that has not often been surpassed.” The reviewer continued, “she makes her dramatis personae talk; and the sentiments which she places in their mouths, the little phrases which she makes them use, strike so familiarly upon our memory . . . that we instantly recognize among some of our acquaintance, the sort of persons she intends to signify, as accurately as if we had heard their voices.” While the review praised Northanger Abbey as “one of the very best of Miss Austen’s productions,” it judged Persuasion “a much less fortunate performance.” Saying that it “contains parts of very great merit,” the critic disapproved of the novel’s moral, “which seems to be, that young people should always marry according to their own inclinations and upon their own judgment . . . .”

A May 1818 review in Blackwood’s Edinburgh Magazine also praised the realism of Austen’s novels: “The singular merit of her writings is, that we could conceive, without the slightest strain of imagination, any one of her fictions to be realized in any town or village in England.” The review also touched on Austen’s public reception: “We have always regarded [Austen’s] works as possessing a higher claim to public estimation than perhaps they have yet attained. They have fallen, indeed, upon an age whose taste can only be gratified with the highest seasoned food.”

In an unusual twist for a book review, the critic did not discuss Northanger Abbey or Persuasion individually. “It is unnecessary to give a particular account of the stories here presented to us. They have quite the same kind of merit with the preceding works of their author.” Austen “has attained the highest perfection of the art of novel writing” and “will be one of the most popular of English novelists.”

Explore the resources below for more in-depth information about Persuasion, a discussion guide for your reading group, and more.

“She Had Only Navy-Lists and Newspapers for Her Authority” ›

Self-Delusion and Agitation in Persuasion ›